It's a honor to teach people to fly and a pleasure to hear the giggles and laughs that are released when they take their first flights. Being a part of that is special.

I have been teaching students to fly since 2002.

My own first class was back in 1987 at a site called Dillon Beach up in northern Marin County. I had a great time but was in college and fiscally challenged so continuing with instruction wasn't possible. I thought however that it was an amazing experience and knew I just had to do it again and thought it couldn't be more then a couple years before my next lesson.  It wasn't however until 1992, five years later that I would fly a hang glider again. 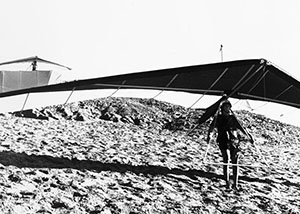 The instruction was with Chandel Hang Gliding but they couldn't teach at Dillon Beach nor their recently new training site at Ed Levin Park in Milpitas because both sites had been closed due to litigation. So Charlie Whitehill, my instructor, decided to teach me and my girlfriend at an unapproved location north of Santa Cruz, at 'Scotts Beach'. Once again I had a great time and knew I had to continue but couldn't because of money. Another five years passed and then in 1987, because Chandel closed their doors, I approached Mission Soaring Center and committed every ounce of my being to learning to fly. The lessons were at Tres Pinos and after 5 of them I received my Hang 1 rating. I continued with lessons at the reopened Ed Levin Park to get my Hang 2 which took 8 more lessons. My instructor was Dave Yount whom I now instruct alongside with for Mission Soaring Center at Tres Pinos, which is to the south, near Hollister.

Today when I drive to the training hill at Tres Pinos with first time students I share much of this. Every one is different, with different backgrounds and skills. Some students learn quicker then others. Some may only need three lessons, while others may need twenty or more.  As Pat the owner of Mission Soaring Center puts it, "It's about the quality and not the quantity." It's tough to see your friend get higher and fly farther then you. As instructors, our primary goal is to teach students how to safely learn to hang glide. It is in our best interests as a business and for the sport to ensure that new pilots our trainied at their own individual skill level. One bad accident can undo years of effort and close a flying site.  So though a students ego may be pushing them to get higher and fly farther and our own ego as instructors would like to see students progress as quicklyas possible, more then anything we need to temper these desires with a safe progression. The two infact are not at odds with one another. A poor flight or rougher landing tend to make the over enthuisastic student much more tentative then they would be if they had a steady controlled safe progression. 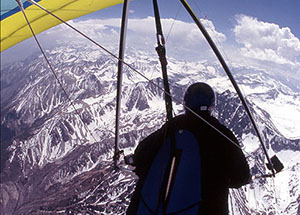 We fly in air which is a slippery thing at best. It displaces and moves invisibly around us. It is more complex then ice since it is 3D gaseous medium that surrounds us, pulses, compresses, expands, and spins. Even with the best of online forecasting tools we get at best a rough picture of what the day may be like and often that picture is inaccurate so we constantly make new evaluations of the conditions throughout the class.

Our students have the advantage of flying within the bounds of the protective shell of the control frame of the hang glider whose out stretched wing tips extend well beyond. Many times I thought how much more challenging and dangerous it would be to teach students how to mountain bike for the first time from our bunny hills. It is however very rare when a student does get hurt. And when they do it is a strained muscle or sunburn from being outside for the 4-5 hrs we are out under the sun..

When a student launches beyond our reach it is not unlike releasing a bowling ball at a bowling alley. Once you let go it is beyond your control, we can offer suggestions to turn 'Left', 'Right', 'Pull-in' but ultimately it is the responcibilty of the student to make the proper corrections. As an instructor, knowing how high to safely launch a student and when to let go, and let that fledging pilot fly aloft on their own takes place during the very first lesson. Everyone is diffferent as well as every flight. So only thru the years of exprience and constant re-evaluation of how we teach, what we say, and how we progress students do we evolve and improve as instructors of flight.

I myself have never broken a bone while hang gliding, the worst accident to date was tripping while running alongside a student which resulted in a shoulder seperation. Arghhh. But I still teach. I still run along side students. I do so to help the sport grow, to hear that laugh and see that smile. For heaven's sake I am teaching people to fly. How awesome is that!!

Below are pictures of some of the students I have taught during the last couple of years. How I wish I took more.